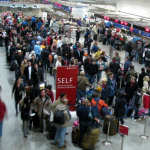 When we came home from our trip to Germany, where we spent the Holidays with our  family and friends, we found ourselves stranded in Newark airport. Our flight to Manchester, NH was cancelled, due to the severe winter conditions that have kept the East Coast captive.

It was 11:00pm EST, but our internal clocks said that it was 5:00am, and we hadn’t been able to get any sleep on the flight from Europe.

A man in a red jacket told us very causally that our flight was cancelled, and that we now had to wait in line to rebook for a different flight.

I looked at the line: There were hundreds of people patiently waiting to get their turn talking to 10 clerks at the different counters. We were asked to wait outside of the waiting hall, in a new line, until things moved, and we would be allowed to join the crown of the hundreds, that was not moving.

The people behind the counters took their time. They were in no rush, and after watching for about 15 minutes that the situation wasn’t changing, I began to look for a better solution.

Starting to ask questions and thinking outside of the box

I went to one of the employees with the red jackets and asked them why everybody was waiting in line. “To rebook their flight” they said. “Is this the only way they can rebook a flight?” I asked. “Can we not do this online as well?” “Ma’am, I don’t know.” said the employee. “You have to wait in line to rebook your flight. Please wait outside until it is your turn!”

“How long have these hundreds of people waiting already?” I asked. “Some of them 4-5 hours or longer.” was the answer.

“Is there a different counter in this airport, where we might be able to rebook our flight?” I asked.

“Yes, but I don’t know if this is full or not. You have to wait here.” Said the employee.

I looked into the tired faces of the people waiting in line, their confusion and resignation to waiting for hours without any change at all.

“We flew in with Swiss Air, and now transfer to American Airlines.” I told the employee. “Maybe someone from Swiss can answer my questions if there is a way to rebook the flight online or over the phone?” “I don’t know, but you can try to ask them directly. They are over there. There is only one person waiting in that line.” said the employee.

The Swiss Clerk did her best to help, and what I learned was that I could go to the regular airline desk and see if things would move a bit quicker there. So that question saved me 4 hours of waiting in line.

I asked my husband to wait with our suitcases, so we didn’t loose our place in line, took my daughter with me and went over to the official airline desk. The line there was significantly shorter, maybe 30 people were waiting, but only one desk was still open. Again, I asked the people in the from how long they had been waiting in line, and they said that they had been there for over 2 hours already.

The solution is showing up

An announcement came through, telling us, that this desk would be closing at 12:30am, and it might be that not all waiting passengers could be served until then.

And then it came: Over the speakers, they told everybody who was waiting in line: “If you’d like to make your reservation over the phone, please dial 1-877-xxx-xxxx!”

I took out my cell phone and noted the number. I waited for another announcement to confirm the final digits.

Stepping out of the crowd dynamics

I was the ONLY one in line who was taking this action. The ONLY one! Nobody else wrote down the number and called!

I had to wait for about 5 minutes, until I had a very friendly and knowledgeable woman on the phone who quickly told me that I could either take two seats on the airline that went out the next morning, or three seats on the airplane that left the day after. Everything else was booked solid.

She told me she’d be happy to make the reservation for me, and that I should call her back asap after discussing these options with my husband.

I told the people who had been waiting in line about the phone number. They preferred to keep waiting in line, even though they had just been told that the counter would close soon and they would most likely not be served that night.

Deciding on the best solution

Then I went back to my husband who was still in line in the hall with the hundreds of people that had been waiting in line for 5-6 hours already.

We decided to get a rental car instead, get some sleep in a hotel nearby and drive back the next morning, instead of being separated on two different flights.

Trying to help a crowd that wants to remain stuck

Before we left the airport, I wanted to help those who had been waiting for so long. I felt that I wanted to give them the information I had been trying to get from the employee, about how to rebook a flight without having to wait for hours in line.

So I walked up to the middle of the line, picked one person who seemed alert, and said with a bit of a raised voice: “Did you know that there is a phone number you can call to rebook your flight? I just called and it took only minutes to get somebody on the phone who could help me.”

The crowd started to move, people looked at me, and wanted to hear more. The person I picked immediately smiled, came over and asked for the number.

I read the number out loud, for people to hear, so they could take it down and call while they were waiting in line. They didn’t have to give up their space in line, they now just had another option to call and take charge of the situation.

Knowing that people had been waiting for hours already, I expected everybody to jump on this opportunity to take charge and change their miserable situation.

So you will understand how stunned I was about the reaction of the crowd:

The first person, that I had picked to start the conversation actually took the number down and called. Then a man came over and yelled at me that he had tried to call the number twice and didn’t get through (in 5 hours, he called twice….).

Then a woman asked me how she could check her suitcases when making a reservation over the phone (the airline wasn’t going to check suitcases until the airplane was there anyways).

Some people said that they had been waiting for so long now that they wanted to just sit it out (even though all they needed to do was pick up the phone while waiting in line. Nothing would be lost, but something could be won.)

The rest just watched what everybody else was doing. Nobody else took the number. Nobody asked questions.

Nobody else took charge!

I was stunned, a bit shocked, to tell you the truth.

Why would people not take an opportunity that could turn their situation around, put them ahead of the pack, get them an advantage to save time and money?

Why would they do as they were told from an employee who didn’t have the bigger picture of the situation but was only told to tell everybody to wait in line?

Why would they not even try to find a good solution for themselves?

Why would they even get angry at the messenger for a missed attempt, instead of trying again?

I have to take a breath here.

I know that a lot of people are like that, and they have their reasons, fears and beliefs that have gotten them there.

Are YOU ready to think outside of the box?

But do you want to be one of them, or do you want to live your life according to what the universe, the system, your surroundings have in stock for you?

Do you want to take charge of your income, your work and the impact you have in other people’s lives, or “live by the rules” that have often been created by people in red jackets that only do their job without having the greater good in mind?

An invitation to talk

If you want to talk about how you can leave the crowd and become your own, empowered you, determining your own income, your work, your opportunities and your future, please connect with me.

I’d love to offer you a free, 20 minute consultation so we can talk about your dreams and the strategies that can get you there.

yes, some of them will require you to think outside of the box.

But there is no box anyways. There are just things we were told to be true for reasons we might not understand.

Take a heart and make an appointment, if thinking outside of the box is truly for you!