It happened on Tuesday evening: 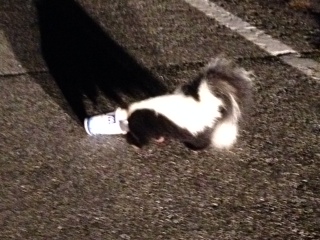 I was driving home on one of our country roads in New Hampshire, when all of a sudden

I saw a small, black and white animal just sitting on the road, not moving.

I stopped the car, put the warning lights on and stepped outside to see what happened.

Here is what I saw:

This poor guy had obviously tried to eat the remains of a McDonalds milkshake out of a carelessly dumped paper cup, that still had the lid on.

He didn’t realize that, once he stuck his head through the plastic lid, he would not be able to

pull it back out.

I realized that, unless someone helps him, he would either be run over by a car or starve to death.

So I stopped the traffic, and walked closer to him, observing how he might react to my voice and my presence.

He didn’t move, he was just sitting there helplessly, and I almost physically felt his fear and his cry for help.

I began to walk around him, talking to him, seeing if he would change his behavior as I got closer.

But I just felt his confusion, his sadness and an almost baby like trust.

He was more scared then me

I realized that this situation was much scarier for him than it was for me.
Slowly going closer, and talking with a calm voice, I grabbed the cup with the lid and pulled it off his head.

Luckily, it came right off, and he was free within a second.

I took some quick steps back, just in case he wanted to follow an instinct to spray and protect himself from me.

But of course he didn’t.

Instead, he turned around and ran, as quickly as he could back into the woods.
I felt a bit like a hero after this, and so happy that this had worked out.

But seriously: What were my options?

The skunk gave me a gift

Frankly, even if he had spread me, this would have been easier to live with than knowing that I could have saved him but sacrificed him because I was afraid.
The stink goes away eventually, but the nagging feeling of leaving someone so helpless behind really doesn’t. Would you agree?
This was his gift to me. This little guy gave me his trust, and asked for help, so that I could connect with a deep, important value for me.
I confirmed to myself who I want to be – as a person, a partner, a business owner and a friend .

And I bet that, if he could have talked to me, and not just connect emotionally, he would have told me that the last thing he wanted to do was spray me. He just wanted to live and get rid of that cup.

How many times do we not take action and do what feels right to us, just because we are afraid of others?

I really had to think about this…

And it made me look at many things I was doing or not doing in a very different light.